How Is the Bitcoin Price Determined?

The price volatility of Bitcoin has left many skeptics questioning the mathematical and economic basis of price movements while searching for a generalized justification of its valuation.

Because of its decentralized nature, Bitcoin doesn’t follow the monetary policy of governments, and Bitcoin is not backed by any underlying asset or government. This creates skepticism among investors and consumers who appreciate the price stability signals a fiat currency enjoys from government policy and support.

Supply and Demand for Bitcoin

On the supply side, Bitcoin is a unique asset in that its new supply schedule is absolutely inelastic; it is completely immune to fluctuations in demand. When most goods, including fiat currency and gold, experience a rise in demand, producers react by increasing production and returning prices to an equilibrium. When demand for bitcoin rises, thanks to the difficulty adjustment, production of new bitcoin does not rise.

➤ Learn more about the Stock-to-Flow model.

Every four years, the Bitcoin halving cuts the block subsidy in half, reducing the flow of new bitcoin into the market, thereby increasing the stock-to-flow ratio and making Bitcoin even more scarce. If the stock-to-flow model is applied to Bitcoin, this should trigger a rise in price, and indeed, each past halving has triggered a dramatic price rise in the following months. However, whether these price appreciations validate the stock-to-flow model is still a topic of much disagreement.

➤ Learn more about the Bitcoin Halving.

How Does Bitcoin’s Scarcity Influence Price?

Unlike with fiat currency, there is a finite supply of bitcoin. There will only ever be 21 million bitcoin in circulation. New bitcoin are created at a fixed rate that decreases overtime, which causes demand to outpace supply. This puts further upward pressure on the price.

Additionally, Bitcoin’s future monetary policy is known absolutely, giving investors great confidence that inflation will be introduced or increased at a later date. 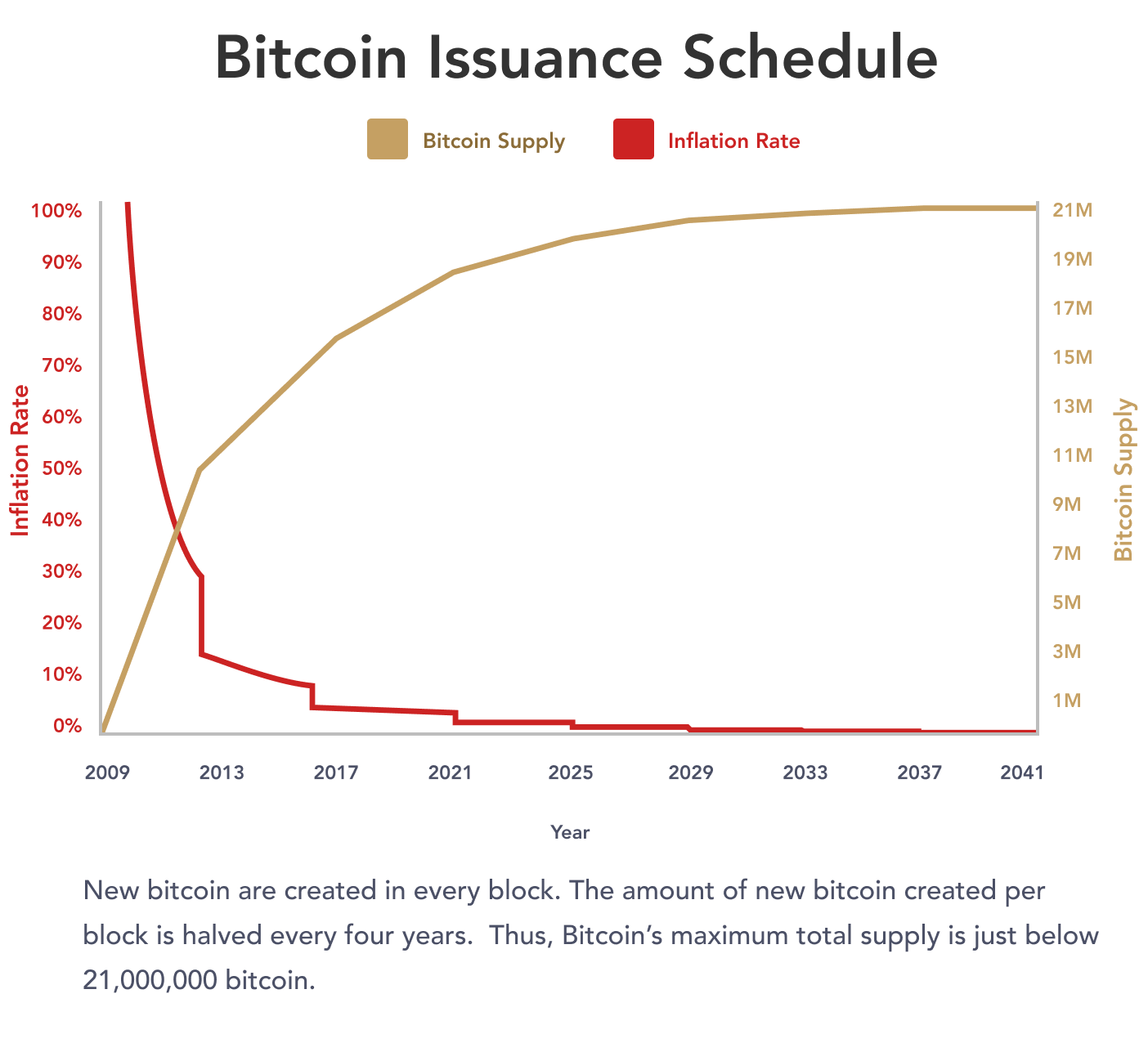 Comparatively, the creation and distribution of fiat currency is potentially infinite and unpredictable. Most central banks target a relatively low inflation rate, but these rates are subject to change by a small committee at any time, and the true inflation rate of fiat currencies is nearly impossible to measure.

Thanks to a finite supply and a relatively small market cap, the price of Bitcoin is also much more sensitive to changes in demand, resulting in increased price volatility.

➤ Learn more about the impact of Bitcoin’s finite supply.

Inflation occurs when the money supply or the velocity of money increases rapidly, causing prices to rise and reducing the value of currency. Bitcoin is deflationary due to its finite supply. The finite supply protects bitcoin from hyperinflation. A government’s ability to print an unlimited amount of currency has caused periods of hyperinflation that have driven the value of many fiat currencies, including the German Mark and Zimbabwean dollar, down to zero.

Concerns over deflationary spirals are not well-founded or supported by economists; supply and demand have always corrected deflationary events in bitcoin and fiat currency. A finite supply also makes Bitcoin a secure long-term store of value, comparable and in some cases more advantageous than gold.

➤ Learn more about why Bitcoin has value.

Why Does Bitcoin Have Value?

Bitcoin’s unique features make it valuable in the eyes of its holders. Notably, its scarce, auditable supply is not controlled by a government or other monolithic entity.

Why Is Bitcoin Volatile?

Bitcoin has historically been a volatile asset. This volatility is primarily due to the nascency of the currency, and is expected to decline as the market matures.

Who Are the Actors in Bitcoin Markets?

The Bitcoin network is supported by miners, nodes, and users, who may be retail investors, traders, or merchants. Increasingly, institutional, corporate investors are entering the Bitcoin market as well to preserve their treasuries.

Related Terms
21 Million
There will never be more than 21 million bitcoin in existence. This limit is defined by an algorithm in Bitcoin’s code and is strictly enforced by each node in the Bitcoin network.
Learn more
Depth Chart
A depth chart is the graph of all the pending orders for a particular asset. Depth charts help traders understand market activity.
Learn more
Hard Cap
Bitcoin total supply will never exceed 21 million bitcoin. This policy gives Bitcoin its absolute scarcity.
Learn more
Hyperinflation
Hyperinflation is extremely rapid inflation. This normally occurs during economic instability, and is very destabilizing for an economy.
Learn more
Price Discovery
Price discovery is the process of determining an asset’s price. This happens naturally as traders place orders.
Learn more
Explore More Terminology ›
River Intelligence