The bitcoin supply has a low inflation rate, and this inflation rate trends toward zero. To ensure that the issuance of bitcoin would eventually cease completely, Satoshi Nakamoto encoded a mechanism to halve Bitcoin’s mining reward roughly every four years. Many believe that this mechanism is key to Bitcoin’s value proposition as it ensures that the bitcoin supply will never exceed 21 million bitcoin.

The last new bitcoin will be mined sometime around the year 2140.

What Are Block Rewards?

Block rewards are the prize miners receive from the network for “finding” the next block in Bitcoin’s blockchain. In brief, mining computers produce “hashes” (long strings of numbers and letters) at an incredible rate of trillions per second to guess the proper hash that will link the previous block in the blockchain, where transactions are stored, with the next block. For their efforts, successful miners receive a block reward in the form of the block subsidy—the new bitcoin that are mined with the new block—along with any fees from the transactions included in the block.

Why Do Miners Get Block Rewards?

Miners receive block rewards, in part, to mint new bitcoin for circulation. Miners typically need to sell the majority of the bitcoin they receive in a block reward to cover electricity and operating costs. Bitcoin mining is very power intensive, and this underlies the other rationale for the block reward: Because miners spend so much money, time and energy to actually extract bitcoin, they are disincentivized from doing anything that might jeopardize their income, such as attacking the network.

When Does a Halving Happen? Is There a Schedule?

Yes, the Bitcoin network is scheduled to undergo its reward halving every 210,000 blocks. Assuming an average block time of 10 minutes, a halving will occur roughly every four years. The third and most recent halving, on May 11, 2020, took Bitcoin’s issuance down from 12.5 BTC to 6.25 BTC every block. Prior to this, the second halving took place on July 9, 2016, reducing the mining reward from 25 BTC to 12.5 BTC. On November 28, 2012, Bitcoin’s initial block reward of 50 BTC was cut in half in the first-ever halving.

Track the countdown to the next halving here.

This process will continue every four years until roughly the year 2140, when the 34th halving will take Bitcoin’s final block reward from 0.00000001 BTC to 0. 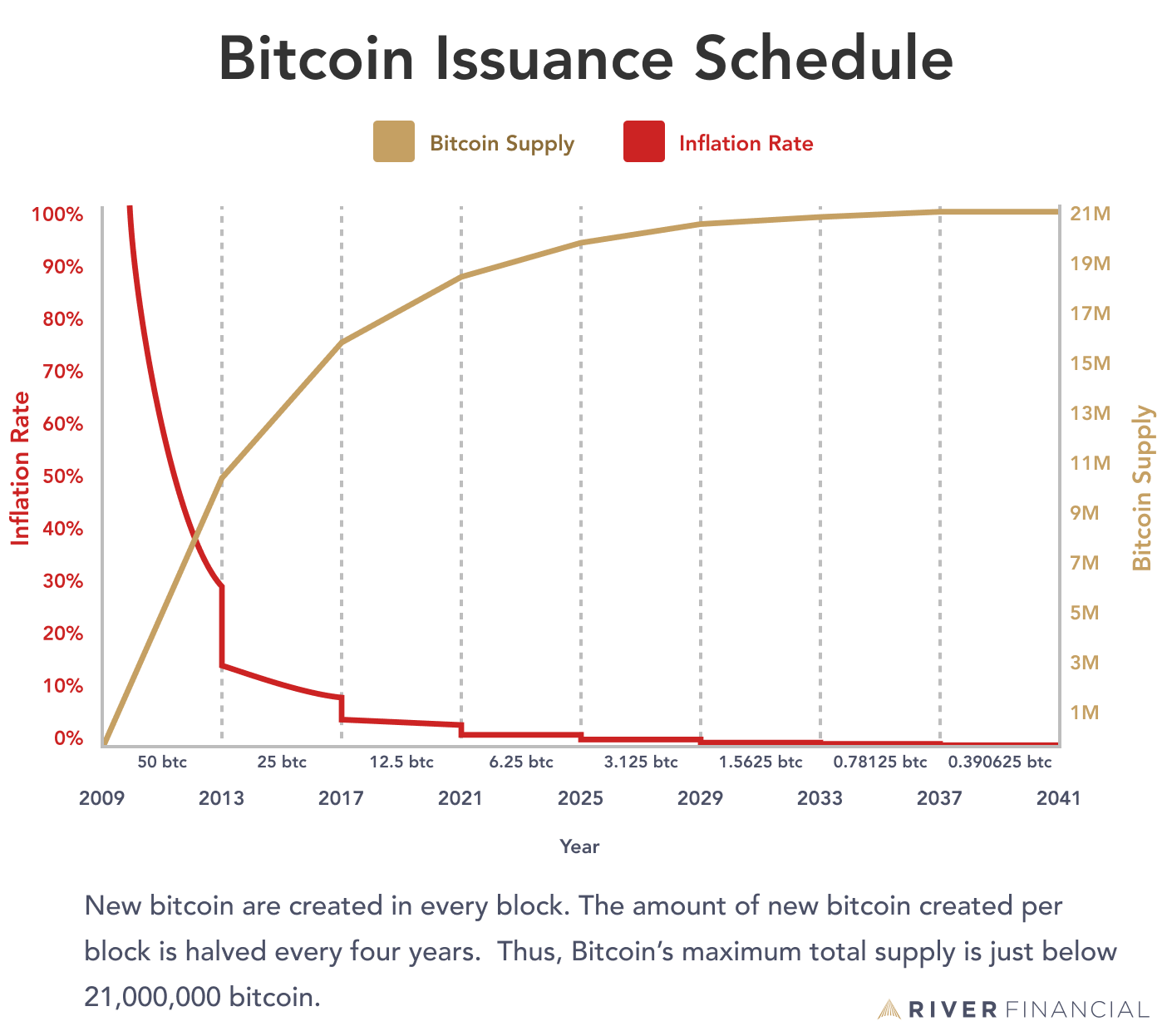 Does the Halving Influence Bitcoin’s Price?

This is a matter of heated debate in the Bitcoin community. “Stock-to-flow” (S2F) advocates argue that a reduced inflation rate and the supply squeeze it creates will produce a positive effect on price. Their argument follows that as long as buying demand remains at pre-halving levels, the price should go up because there are half as many new bitcoin entering the open market from miners.

There will never be more than 21 million bitcoin created.

Others do not believe that the halving directly correlates to Bitcoin price increases. Their rationale is that the halving does not create demand in itself, even if it does make the bitcoin supply more scarce over time. Per this argument, just because miners may be selling a reduced number of bitcoin each day does not mean the aggregate selling on the open market will be reduced. Other opponents of the S2F model believe halvings should be priced in because their occurence is public knowledge.

What Will Happen When the Block Reward Becomes Too Small?

This is also a subject of heated debate. Ultimately, transaction fees will replace the block reward as the primary revenue for miners. Critics argue that this will be economically untenable, but many of Bitcoin’s leading voices say that these fears are overblown. They argue that advancements in transaction batching and other layer-two technologies will likely iterate this problem away.

➤ Learn more about what will happen after all bitcoin are mined.

Can Bitcoin's Hard Cap of 21 Million Be Changed?

There will never be more than 21 million bitcoin. This rule, encoded in Bitcoin’s source code, cannot be changed thanks to Bitcoin’s decentralized nature. If it were possible, changing this hard cap would destroy the value proposition of Bitcoin.

Related Terms
21 Million
There will never be more than 21 million bitcoin in existence. This limit is defined by an algorithm in Bitcoin’s code and is strictly enforced by each node in the Bitcoin network.
Learn more
Deflation
Deflation is a general decrease in the price of goods and services in an economy over time. This results in higher purchasing power for the relevant currency.
Learn more
Bitcoin Transaction Fee
All Bitcoin transactions must pay a fee to be included in the blockchain. The fee is paid to the miners. The higher the fee, the faster the transaction will be confirmed. Fees are measured based on the data size of the transaction.
Learn more
Explore More Terminology ›
River Intelligence