What Is the Lightning Network?

Bitcoin’s blockchain can only process an average of 7 transactions per second. This is not enough to make Bitcoin a suitable platform for handling the millions of transactions humans make every day. Thus, if Bitcoin is to become a medium of exchange, payment systems must be built which allow users to transact bitcoin quickly and cheaply. The Lightning Network is one such payment system.

Bitcoin itself cannot scale to have every single financial transaction in the world be broadcast to everyone and included in the block chain. There needs to be a secondary level of payment systems which is lighter weight and more efficient.
– Hal Finney describing the need for layered scaling solutions, BitcoinTalk Forum

What Is the Lightning Network?

How Does the Lightning Network Work?

What Is a Lightning Payment Channel?

A Lightning channel is a bidirectional payment channel, meaning both parties can send and receive payments across the channel. Lightning channels comprise the Lightning Network and have a defined bitcoin capacity. This capacity is split between the two parties to the channel, and bitcoin is moved from one side of the channel to the other by Lightning transactions.

Transacting Over a Lightning Channel

A payment channel is a pool of funds divided between two parties. These funds are always stored in the multisig address—there is no extra token or representation of the bitcoin created by the Lightning Network. Lightning transactions occur over this channel by redistributing the funds stored in the multisig address. Whenever bitcoin is spent through the channel—from party A to party B—the channel’s balance updates. However, these updates are not recorded on the blockchain.

In the example below, Alice and Bob open up a channel and deposit 1 BTC each in a multisig address. Then Bob pays Alice 0.5 BTC on the Lightning Network. The shared balance is still 2 BTC, but 1.5 BTC belong to Alice, and 0.5 to Bob. 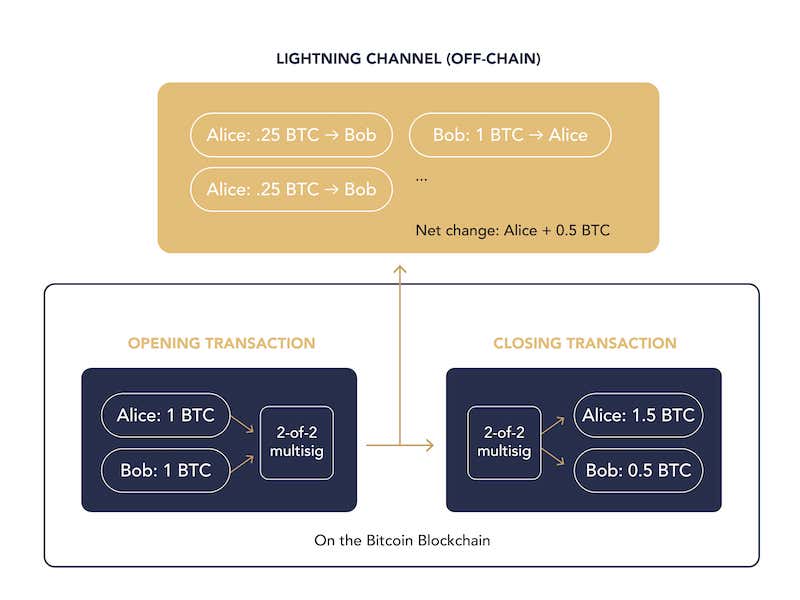 The settlement of the funds will occur when both parties decide to close the channel. When the channel closes, an on-chain transaction will be recorded on Bitcoin’s blockchain, spending bitcoin from the multisig address. When this happens, the balance in the channel is settled. Alice will now have 1.5 BTC and Bob will now have 0.5 BTC.

The fundamental building blocks of the Lightning Network are nodes and payment channels that allow nodes to communicate with one another. Naturally, not every node will be connected to the node that it wants to send a payment to. Routing is what allows transactions between two unconnected parties to occur through a series of pre-existing channels.

How Does Lightning Routing Work?

Imagine that Alice wants to pay Carol over the Lightning Network, but does not have a direct channel with Carol. However, both Alice and Carol have channels with Bob. A cryptographic process allows Alice to send a payment to Bob with the assurance that Bob will forward the payment to Carol. In exchange for his assistance, Bob will receive a small fee.

Routing is enabled by Hashed Time Locked Contracts (HTLCs). An HTLC is a special type of Bitcoin transaction which serves as a smart contract. In the context of the Lightning Network, HTLCs are used to allow Alice to promise payment to Bob only if he can prove that he has paid Carol the proper amount.

Who Developed the Lightning Network?

As shown in the video above, River supports Lightning deposits and withdrawals. We were among the first Bitcoin businesses to do so in 2019.

River is one of the largest participants in the Lightning Network, and we have shared our insights from working with Lightning publicly in our Lightning report.

River also offers Lightning Services to companies that want to adopt Lightning without having to set up and maintain all of their own infrastructure.

The Myths of Bitcoin

Although the Bitcoin market and its institutional support have grown rapidly in recent years, negative perceptions of its core principles and utility have kept many potential users from participating.

Related Terms
Hashed Time Locked Contract (HTLC)
A Hashed Time Locked Contract is a timelocked Bitcoin transaction used on the Lightning Network to route payments between parties who do not share a Lightning Channel.
Learn more
Basis of Lightning Technology (BOLT)
The Basis of Lightning Technology (BOLT) are specifications that describe the consensus rules and standards of the Lightning Network. The standards established by the BOLTs allow different Lightning implementations to cooperate.
Learn more
Preimage
A preimage is the data that is input into a hash function to calculate a hash. Since a hash function is a one-way function, the output, the hash, cannot be used to reveal the input, the preimage.
Learn more
Explore More Terminology ›
River Intelligence