What Is the Byzantine Generals Problem?

The Byzantine Generals Problem is a game theory problem, which describes the difficulty decentralized parties have in arriving at consensus without relying on a trusted central party. In a network where no member can verify the identity of other members, how can members collectively agree on a certain truth?

The game theory analogy behind the Byzantine Generals Problem is that several generals are besieging Byzantium. They have surrounded the city, but they must collectively decide when to attack. If all generals attack at the same time, they will win, but if they attack at different times, they will lose. The generals have no secure communication channels with one another because any messages they send or receive may have been intercepted or deceptively sent by Byzantium’s defenders. How can the generals organize to attack at the same time? 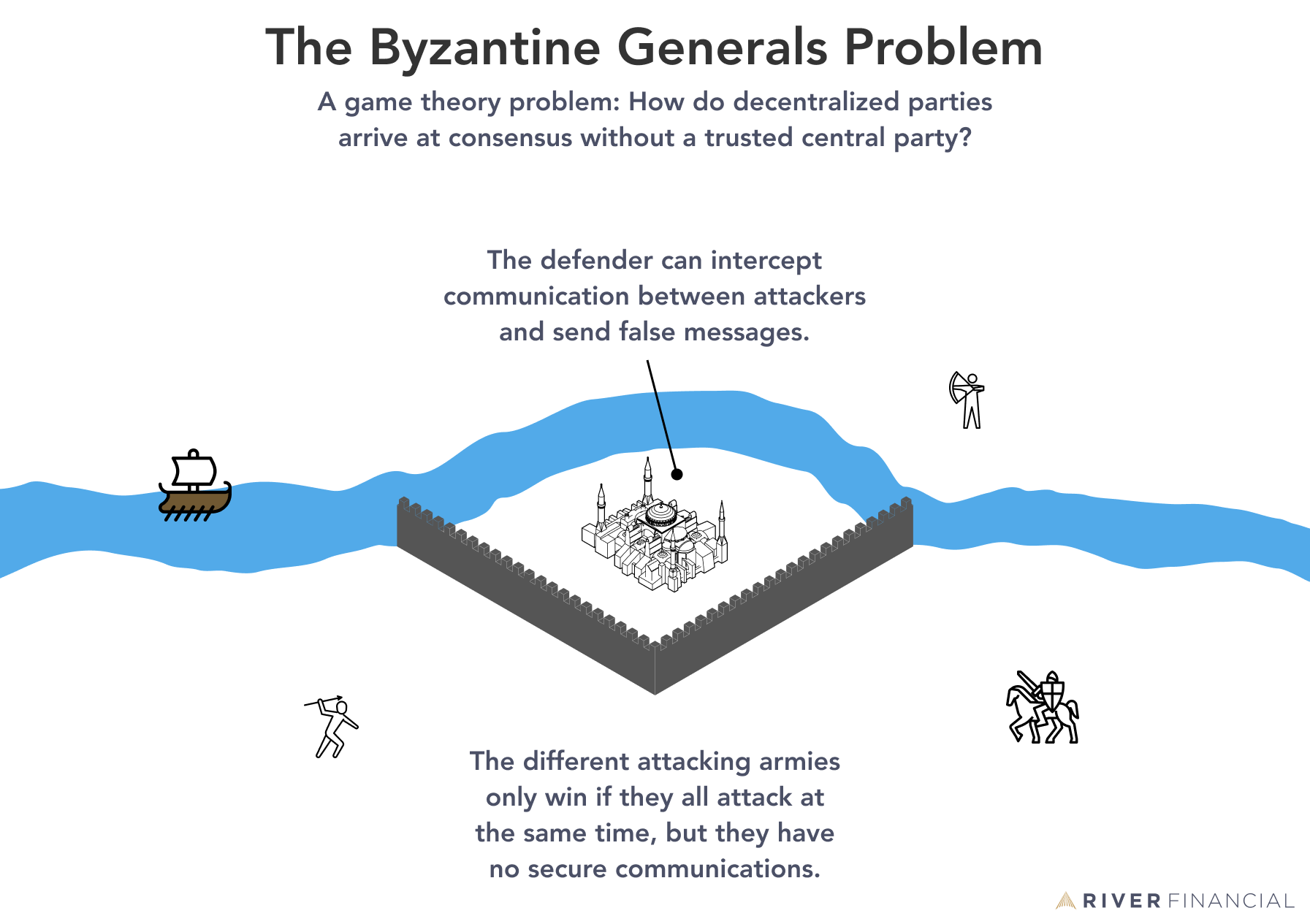 For example, in the traditional financial system, banks are trusted to show clients their balances and transaction histories in an honest manner. If a bank did attempt to lie or defraud their customers, a central bank or government is trusted to rectify the breach of trust.

Centralized systems do not solve the Byzantine Generals problem, which requires that truth be established trustlessly. Rather, they sacrifice trustlessness for efficiency and choose not to face the problem at all. However, centralized systems are vulnerable to corruption by the central authority.

Money and the Byzantine Generals Problem

The root problem with conventional currency is all the trust that's required to make it work. The central bank must be trusted not to debase the currency, but the history of fiat currencies is full of breaches of that trust.

In order for a money to solve the Byzantine Generals Problem, it would have to be verifiable, counterfeit-resistant, and trustless. It was not until the invention of Bitcoin that this feat was achieved.

Bitcoin was the first realized solution to the Byzantine Generals Problem with respect to money. Many proposals and projects preceding Bitcoin had attempted to create money separate from the government, but all had failed in one way or another.

As a monetary system, Bitcoin needed a way to manage ownership and prevent double spends. To achieve this in a trustless manner, Bitcoin uses a blockchain, a public, distributed ledger which stores a history of all transactions. In the Byzantine Generals analogy, the truth that all parties must agree to is the blockchain.

If all members of the Bitcoin network, called nodes, could agree on which transactions occurred and in what order, they could verify ownership of bitcoin and establish a functioning, trustless money without a centralized authority

Bitcoin managed to solve the Byzantine Generals Problem by using a Proof-of-Work mechanism in order to establish a clear, objective ruleset for the blockchain. In order to add information, called blocks, to the blockchain, a member of the network must publish proof that they invested considerable work into creating the block. This work imposes large costs on the creator, and thus incentivizes them to publish honest information.

Because the rules are objective, there can be no disagreement or meddling with the information on the Bitcoin network. The ruleset governing which transactions are valid and which are invalid is also objective, as is the system for determining who can mint new bitcoin. Additionally, once a block has been added to the blockchain, it is extremely difficult to remove, making Bitcoin’s past immutable.

If any member of the network attempts to broadcast false information, all nodes on the network will immediately recognize it as objectively invalid and ignore it. Because each node can verify all information on the Bitcoin network itself, there is no need to trust other members of the network, making Bitcoin a trustless system.

Bitcoin is a peer-to-peer currency that is a network of nodes running Bitcoin software. A node is able to receive and communicate transaction information with other nodes in the Bitcoin network. Bitcoin nodes store and verify the blockchain.

What Is the Double Spend Problem?

The Double Spend problem describes the difficulty of ensuring digital money is not easily duplicated. Bitcoin offers a trustless solution to the double spend problem, and third parties such as banks attempt to solve it as well.

Cryptography is a field of math which encompasses a variety of different methods for maintaining digital security and privacy. Bitcoin uses cryptography in several ways to ensure its security.

Related Terms
Decentralized Ledger
A decentralized ledger is a record of all transactions on a network. This ledger is maintained and updated by many independent nodes. Bitcoin uses a blockchain and Proof-of-Work to organize the network and maintain its decentralized ledger.
Learn more
Byzantine Fault Tolerance (BFT)
Byzantine Fault Tolerance (BFT) is a trait of decentralized, permissionless systems which are capable of successfully identifying and rejecting dishonest information. Byzantine fault tolerant systems have solved the Byzantine Generals Problem and are robust against sybil attacks.
Learn more
Bitcoin Node
A node is a discrete member of a network which interacts with other nodes to form the network. Bitcoin nodes store and validate the blockchain and exchange blocks and transactions with one another in order to maintain consensus.
Learn more
Double Spend
A double spend occurs when someone is able to spend the same money twice, fooling one or both parties into believing they have been paid. Bitcoin solves the double spend problem through the use of a decentralized ledger and a timestamped blockchain.
Learn more
Explore More Terminology ›
River Intelligence