Cryptography is a field of math which encompasses a variety of different methods for maintaining digital security and privacy. Encryption and decryption, hash functions, and digital signature algorithms are all areas of study within the field of cryptography. Bitcoin is known as a cryptocurrency because it makes use of cryptography to implement a decentralized monetary system and enable fully digital peer-to-peer payments.

Bitcoin is far from the only technology to use cryptography. Today, all but the simplest electronic devices use some form of cryptography to protect sensitive information and verify digital identity. Password-protected phones and computers, governments, telecommunication networks, banks, social media, and more all implement cryptography for reliable security.

Encryption is used by almost every digital device and service in order to protect data against unauthorized parties or malicious attackers. Strong encryption allows users to safely browse the internet, securely protect their data with passwords, and message one another in privacy.

The Bitcoin network and database itself does not use any encryption. As an open, distributed database, the blockchain has no need to encrypt data. All data passed between Bitcoin nodes is unencrypted in order to allow total strangers to interact over the Bitcoin network.

However, some Bitcoin services require more security and privacy. In order to securely store private keys, most Bitcoin wallets encrypt their data using a variety of encryption schemes. For example, Bitcoin Core encrypts its wallet using the Advanced Encryption Standard (AES). This is the same encryption algorithm used by the NSA for its classified information, and AES is considered extremely secure. In order to decrypt a Bitcoin Core wallet, a user must enter their password, which is used as the decryption key.

The output of a cryptographic hash function is also deterministic, meaning that the same input given to the same hash function will always yield the same output. However, if a single character or byte of data is changed in the input, the new output will not resemble the old output in any way.

This property is critical to a hash function’s utility as it enables rapid verification of arbitrarily large data. For example, if Alice has a large file, and she wants to verify that it has not been tampered with, she can compare the hash of the file from when she last verified it to the current hash of the file. If the file is unchanged, the two hashes will match exactly. However, even the smallest change will result in almost all of the characters of the hash being changed.

Lastly, the output of a cryptographic hash function is a random, one-way function. This means that the input cannot be predictably formed to yield a desired output. Additionally, an output does not display any information about the input, and thus, an output cannot be used to derive an input.

This property is useful for several reasons. Because it is a one-way function, a hash can be used as a commitment to certain information without revealing the information being committed to. The randomness of hash functions also makes them useful for Bitcoin’s Proof-of-Work system.

The Bitcoin protocol mainly uses SHA-256 for all hashing operations. Most importantly, hashing is used to implement Bitcoin’s Proof-of-Work mechanism. A hash is a large number, and in order for a miner to submit a block to the network, the hash of the block must be below a certain threshold. Because hashing is a random, unpredictable process, finding a valid hash can only be achieved through intensive guessing.

The properties of hash functions also ensure Bitcoin’s immutability. Inside each block, a Merkle tree is constructed by calculating a single hash of all transactions in a block. This ensures that every transaction is immutable once included in a block.

Each block also guarantees the immutability of preceding blocks. This is accomplished by including the hash of the previous block in every block, meaning that once a block is added to the blockchain, it cannot be altered. 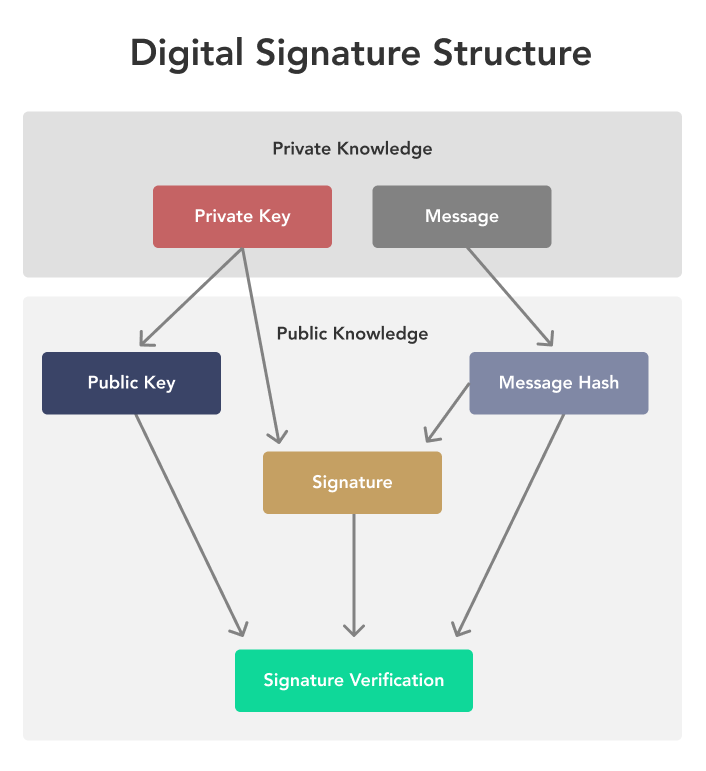 Bitcoin implements a digital signature algorithm called ECDSA which is based on elliptic curve cryptography. While ECDSA allows a private key to sign any type of message, digital signatures are most frequently used to sign transactions and send bitcoin.

The Bitcoin protocol allows pieces of bitcoin called UTXOs to be sent to a public key, such that only a valid signature from the corresponding private key can unlock it. This signature is published to the blockchain so that any member of the Bitcoin network can verify that the signature, the public key, and the message match.

Thanks to this design, Bitcoin is a purely peer-to-peer system. A Bitcoin transaction can be sent from payer to payee without any third party taking custody of the funds. Although miners process each transaction, they are unable to produce valid signatures for other people’s bitcoin and thus unable to steal any bitcoin.

Bitcoin uses a distributed ledger to publically record all transactions on the network. Proof-of-Work provides an objective way for Bitcoin users to agree on the state of the ledger.

Related Terms
Signature
A digital signature is produced by a private key and proves that the owner of the private key and corresponding public key has validated the signed data.
Learn more
Hash Function
A cryptographic hash function is a one-way, random mathematical function. Hash functions underlie Bitcoin's security model in several ways.
Learn more
Proof-of-Work (PoW)
Bitcoin miners must submit Proof-of-Work in the form of a valid hash in order to have their block be considered valid.
Learn more
Explore More Terminology ›
River Intelligence