Bitcoin is a peer-to-peer currency that is regulated by a network of nodes. A node is simply a computer that runs the Bitcoin software. Bitcoin nodes send and receive transactions with other nodes in the network and verify their validity. Bitcoin nodes cooperate with Bitcoin miners to maintain the integrity of the system.

First, nodes broadcast and relay transactions to other nodes and miners. Miners batch these transactions into blocks and publish those blocks to the blockchain, validating the transactions. Nodes receive these blocks, share them amongst one another, and verify that the miners are following the rules of the network. When a node receives a new transaction or block, it relays it to its peers, so that all nodes and miners can remain in sync and maintain identical blockchains. 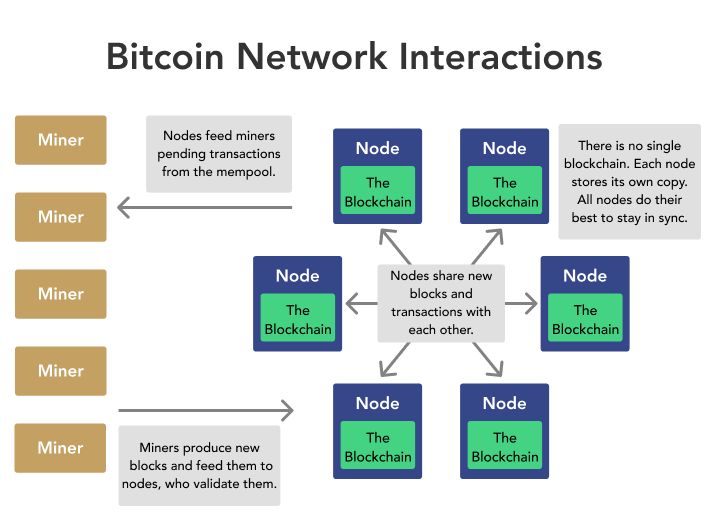 We will limit our discussion to the two node types described in the Bitcoin whitepaper—full nodes and lightweight (SPV) clients.

A lightweight or Simplified Payment Verification client, are similar to full nodes in that they can verify whether transactions were included in a block. However, light nodes do not verify and validate all of the network’s transactions and do not store a copy of the blockchain.

Because light nodes don’t process large amounts of data through the network, they are much cheaper to maintain. For this reason, they were historically used in mobile Bitcoin wallet but are quite rare today.

Why Run a Full Node?

Users run a Bitcoin full node for many reasons. Primarily, it allows a user to independently verify the state of the Bitcoin network. As a result, a user can:

Another motivation for running a full node is to make the Bitcoin network more robust. As more nodes exist to fully validate transactions, the network becomes more resistant to certain types of attacks. Distributed, fully-functioning nodes are central to Bitcoin’s decentralized, peer-to-peer architecture and help keep the network secure.

In short, Bitcoin nodes are the central nervous system of the Bitcoin network. They broadcast, verify, and store transactions. They act both as gateways to the network and an information superhighway to relay network data to all participants.

Why Should I Run a Bitcoin Node?

A node is an integral part of the Bitcoin network. Nodes enforce Bitcoin’s rule set and thus control Bitcoin. An individual should run a node to verify their bitcoin ownership trustlessly and ensure that other members follow the rules of the network.

What Is a Blockchain?

Blockchain is the technology that underpins Bitcoin and allows its users to exchange value without a central intermediary. A blockchain is a database containing the entire history of Bitcoin transactions.

What Is the Double Spend Problem?

The Double Spend problem describes the difficulty of ensuring digital money is not easily duplicated. Bitcoin offers a trustless solution to the double spend problem, and third parties such as banks attempt to solve it as well.

Related Terms
Consensus
Consensus is the ideal and the method of coordination between individuals in a decentralized system. Consensus is achieved at the development level with regards to changes to the Bitcoin protocol, and it is also achieved with regards to agreement on the state of the blockchain.
Learn more
Blockchain
A blockchain is a chronological list of records, called blocks. Each of these blocks contains transactions. Once a block is added to the blockchain, it is infeasible to alter, giving Bitcoin its immutability.
Learn more
Double Spend
A double spend occurs when someone is able to spend the same money twice, fooling one or both parties into believing they have been paid. Bitcoin solves the double spend problem through the use of a decentralized ledger and a timestamped blockchain.
Learn more
Explore More Terminology ›
River Intelligence