Will Inflation Hurt the Economy?

Inflation is the average price change in a market basket of consumer goods and services over time. When prices increase, each unit of currency loses value and purchasing power.

In the United States, the Federal Reserve aims for 2% annual inflation, but realized inflation often exceeds the Fed’s targeted rate. For that reason, cumulative inflation is a better representation of the dollar’s value over the long term.

What Is the Consumer Price Index (CPI)?

The U.S. Bureau of Labor Statistics measures inflation by monitoring the monthly increase in the Consumer Price Index (CPI). The CPI measures the average price for a basket of consumer goods each month dating back to 1913.

How Useful Is the CPI?

The CPI will not perfectly reflect inflation.

A market basket can include any number of goods and services, but the CPI market basket only measures the average price of essentials, including housing, transportation, and food, which does not account for nuances amongst individual consumers.

Moreover, the contents of the CPI basket do not change over time. The CPI also fails to consider that consumer spending habits change based on the cost of goods. Sometimes, variant calculations are used to change how the CPI represents inflation. Overall, the CPI is a broad, aggregate, and somewhat inaccurate method for conceptualizing the price of goods in the U.S over time.

Economists often debate the causes of inflation. One school of thought, the Austrian School, posits that inflation is driven by increases in the money supply. Others argue that consumer spending, the velocity of money, or changes in production costs inflate prices. Both theories recognize that one dollar will purchase fewer goods as time goes on.

Bitcoin is capped at 21 million supply, which makes it an attractive hedge to global inflation.

Increasing the money supply causes inflation by flooding the market with newly created currency, which lowers the value of all currency in circulation. This argument is based on supply-and-demand: holding all else equal, if the supply of money increases, its value should decrease. The government can inflate the price of goods by purchasing assets or taking out debt, therefore increasing the money supply.

Increasing the money supply is easier than ever before. Only a tiny fraction of all dollars exist in physical form, and the U.S. Treasury no longer needs to produce cash or coins to increase the supply. Today, the Fed can digitally issue new dollars and use them to purchase assets from banks and investors. Similarly, the government can lower bank reserve requirements and discount rates, allowing those banks to lend more money.

Cost-push inflation occurs when increased raw materials costs, labor costs, or other costs of production translate to increased prices of goods. For example, the price of oil increases when it becomes more difficult to produce or import oil. Manufacturers who use oil to produce goods pass those costs onto consumers.

As essential goods become more expensive, consumers will look for inferior substitutes. But if consumers can not find a reasonable alternative to purchase, they may have no choice but to pay higher prices, which is determined by the price elasticity of demand.

Demand-pull inflation describes how inflation can begin with an increase in prices due to periods of strong consumer demand or government spending.

When aggregate demand exceeds supply during an economic expansion, each dollar can purchase fewer goods. Demand-pull essentially claims that lower unemployment rates will result in higher demand, which raises prices.

Will Inflation Hurt the Economy?

Central banks, deposit institutions, and academics overwhelmingly claim that inflation is beneficial or even necessary for economic growth. The Fed considers moderate inflation to be healthy for the economy; in theory, moderate inflation stimulates spending. However, inflation has harmful effects on the economy. These effects are often downplayed, overlooked, and ignored by central banks, deposit institutions, and others who benefit from inflationary policies.

When inflation occurs, the entire economy consumes more and saves less, and thus the entire system is more fragile. Savings are a flexible hedge against the uncertain future for both individuals and businesses. When a society does not save wealth, they have a reduced ability to endure minor disruptions or economic downturns.

For consumers, even moderate inflation means the dollar consistently loses value over time. Since 2000, the dollar has lost more than 50% of its purchasing power. That means consumers pay 2x what they would have two decades ago for the same goods and services.

When a society’s money is constantly being devalued, investors are forced to think on a shorter time horizon. Absent inflation, investors are able to take time to find a suitable investment.

In an inflationary environment, delaying investment has a direct economic cost, as an investor’s cash loses value over time. As a result, investors must constantly deploy as much of their capital as possible, even if investment is risky or otherwise suboptimal. This leads to the misallocation of capital, also called a bubble, and an eventual economic collapse.

Inflation inaccurately boosts statistics and demonstrates economic growth, even when real productivity has not necessarily increased.

This can make the economy look more successful and healthy than it really is, which can inaccurately influence policy creation and spending allocation.

The Effects of Hyperinflation

Hyperinflation is an extreme form of inflation, where the price of goods and services rises rapidly in a short period. Generally, economists consider an annual inflation rate greater than or equal to 1,000% as hyperinflation.

Hyperinflation will significantly disrupt consumer spending and effectively destroy the value of the native currency. At one point in 2018, inflation in Venezuela exceeded 900,000%, and the bolivar lost nearly all purchasing power.

Another example of hyperinflation occurred from 1991-2008 in Zimbabwe. Hyperinflation in Zimbabwe was caused by faulty monetary policy implemented by the government to finance military efforts in the Democratic Republic of the Congo. The Reserve Bank of Zimbabwe increased the money supply and declared inflation illegal. As a result, prices soared, and consumers sought better currency alternatives.

➤ Learn more about hyperinflation in Zimbabwe.

The Cantillon Effect describes the process by which inflation will hurt some economic participants more than others.

Since new fiat currency reaches the economy in various stages, the first recipients of new money supply have an arbitrage opportunity to spend before market prices increase.

Inflation exacerbates existing economic inequality in society, and why financial institutions can spend new money before they feel the impacts of inflation, while the average person cannot.

What Does Inflation Mean for Me?

The most immediate effect of inflation is that the prices of goods will rise. Some prices will rise more rapidly than others. Inflation can be seen in several ways: nominal prices can increase, goods can be sold at the same price but in smaller quantities, or goods are produced and sold at a lower quality. This is called shrinkflation.

Inflation generally reduces investor confidence in fiat currency and, as prices go up, consumers are incentivized to spend cash at the present time rather than save because money that is saved loses value. Accordingly, consumers are willing to spend more cash to obtain an asset like Bitcoin, which is a mathematically secure store of value. 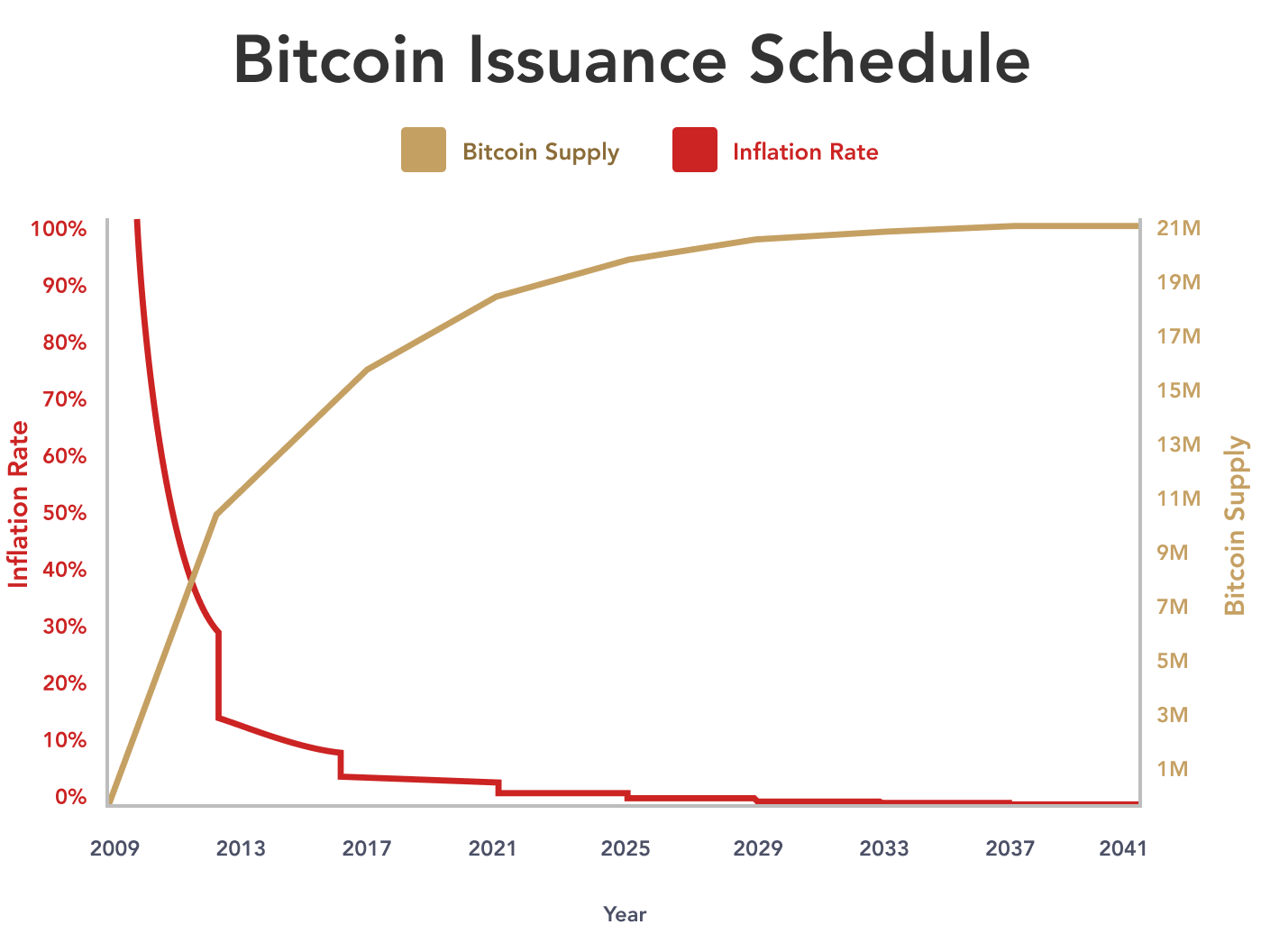 Notice: River Financial does not provide investment, financial, tax, or legal advice. The information provided is general and illustrative in nature and therefore is not intended to provide, and should not be relied on for, tax advice. We encourage you to consult the appropriate tax professional to understand your personal tax circumstances.

Fiat currency is a government-issued currency that is not backed by any asset. The government can increase the supply of this currency. Most economies use fiat currency as their main form of money.

The History of Monetary Collapse in Zimbabwe

Uncontrolled hyperinflation in Zimbabwe caused the monetary system to become virtually ineffective, reducing the quality of life for its citizens and stunting development progress.

Bitcoin as a Medium of Exchange

Related Terms
Hyperinflation
Hyperinflation is extremely rapid inflation. This normally occurs during economic instability, and is very destabilizing for an economy.
Learn more
Cantillon Effect
The Cantillon Effect describes the uneven effect inflation has on goods and assets in an economy. As a result of the Cantillon Effect, inflation can be seen as a non-legislative and regressive tax on the purchasing power of citizens by the government.
Learn more
Debasement
Debasement is the deliberate reduction in the value of a money. For commodity money, debasement is usually achieved via a reduction in the gold or silver content of a coin. For digital or paper money, debasement can be achieved simply by creating more digital or paper money.
Learn more
Explore More Terminology ›
River Intelligence