What Is MEV? Does it Apply to Bitcoin Mining?

Miner (or Maximal) Extractable Value is the profit to be made by including, excluding, or reordering the transactions in a block. This profit, MEV, is considered separate from any block rewards or transaction fees the miner would otherwise receive. Under a Proof-of-Work (POW) consensus algorithm, miners are responsible for the confirmation of transactions, which in turn makes possible MEV.

Outside of a few examples, MEV is rather sparse on Bitcoin, yet has proliferated on Ethereum. This is the result of complex transactions involving smart contracts that facilitate lending, borrowing, and trading. A general rule of thumb is that the more complex transactions become, the more opportunities miners have to create MEV by exploiting the inefficiencies caused by added complexity.

Arbitrage is the most common form of MEV. Simply put, an arbitrage opportunity exists when the price of the same asset differs across exchanges. Similar to high-frequency traders that find arbitrage opportunities in traditional financial markets, miners deploy bots to spot any potential arbitrage trades on decentralized exchanges (DEXes).

Note that arbitrage is only considered MEV when a miner swaps another’s transaction with their own in order to take advantage of the opportunity.

Decentralized finance (DeFi) lending platforms require users to deposit collateral before taking out a loan. Naturally, the price of the asset used as collateral fluctuates over time, and if the asset drops below a specific price the collateral is then liquidated. Often, whoever processes the transaction to drop the price below the liquidation point then receives a reward.

In such cases where a liquidation reward is paid to the liquidator, liquidators search for borrowers close to liquidation to be first to submit the transaction that liquidates the borrower. As such, an MEV opportunity exists here for miners.

Say, for example, a miner discovers a large buy order in the pool of unconfirmed transactions. Being privy to this information, the miner can now insert their own buy order before this transaction to lock in a better price before the large buy order pushes the price up. This describes a process known as frontrunning.

Backrunning, conversely, occurs when a miner places a sell order after spotting a large buy to sell into the buying pressure.

A sandwich trade entails miners placing a buy order immediately before, and a sell order immediately after, the transaction that moves the market price. Therefore, it is often the preferred trade, since risk is managed by having concurrent buy and sell orders.

When it comes to frontrunning, backrunning, or sandwiching, miners essentially use their ability to order transactions to place their own transactions before or after transactions they know will move the price in the favor of their trade. Frontrunning is not exclusive to miners as anyone parsing blockchain data can pay higher fees to insert their trade before the order they are looking to frontrun. However, miners have the most control in ensuring these trades run smoothly given they are the party ordering transactions. 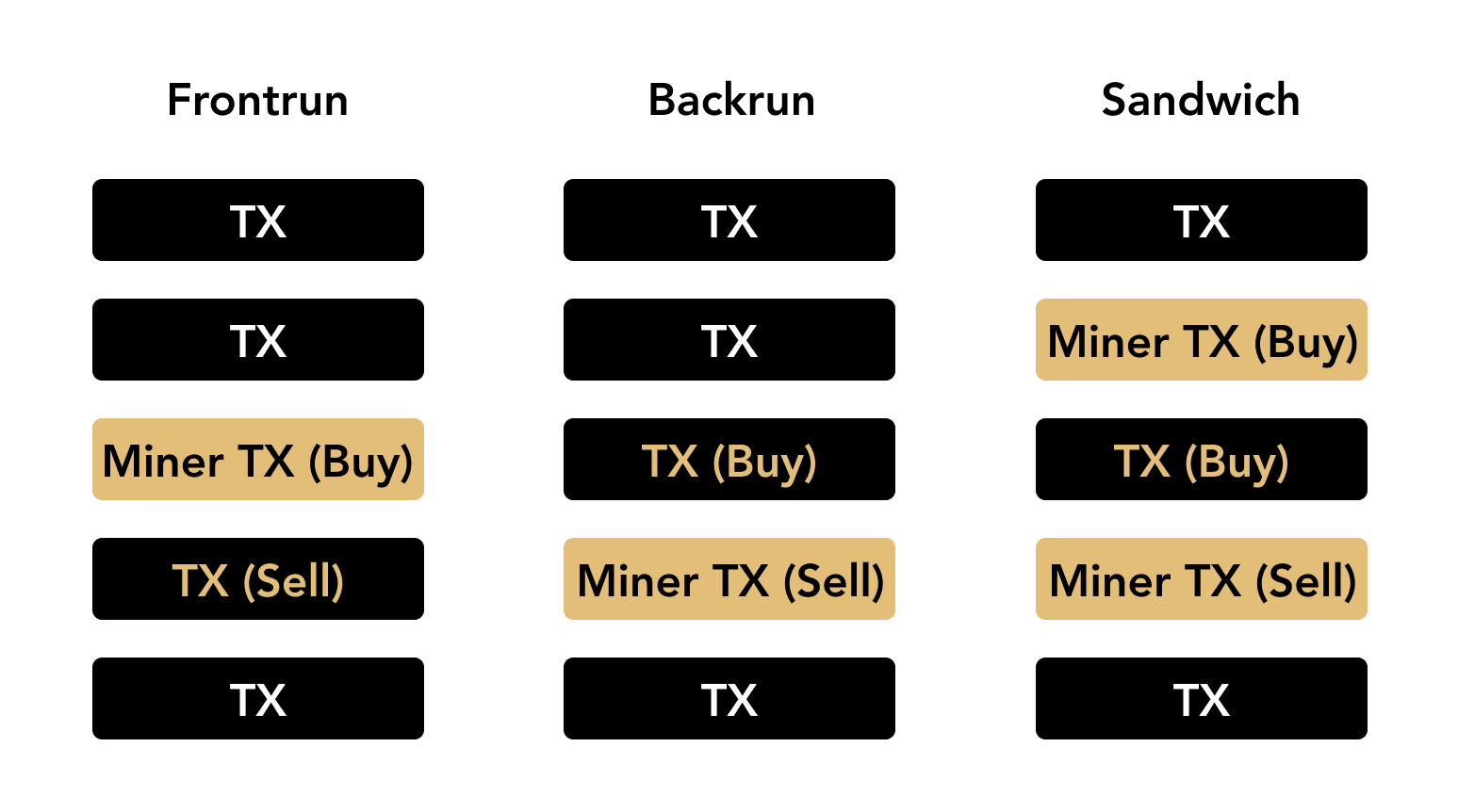 Does MEV Apply to Bitcoin?

With MEV being a feature of proof-of-work consensus, and given Ethereum’s current proof-of-work consensus is based upon Bitcoin’s, the same MEV opportunities theoretically apply to Bitcoin. In practice however, MEV has rarely appeared on Bitcoin since practically all Bitcoin transactions are “simple” transactions transferring bitcoin between two parties. As mentioned earlier, more complex transactions are required for MEV to flourish. Therefore, if efforts to bring those complex transactions to Bitcoin through Taproot or Layer 2’s prove successful, the amount of MEV on Bitcoin will naturally increase.

An Early Example of MEV in Bitcoin

Evidence of MEV dates back to the earliest days of Bitcoin. Back in 2013, Bitcoin Core developer Peter Todd offered bounties for any user able to show a hash collision against a number of cryptographic algorithms, particularly SHA-1. The bounty for SHA-1 reached 2.48 bitcoin, to be collected by any user who signs a transaction on Bitcoin demonstrating the collision attack. A collision attack, also known as a hash collision, occurs when two inputs are found producing the identical hash value, thus threatening the security of the cryptographic hash function.

Todd realized that after a user submitted a transaction proving a collision, miners would have the ability to destroy the block containing the user’s transaction to then create their own identical transaction and collect the bounty for themselves. Hence, albeit in slightly different words, Todd described the phenomena now known as MEV. Recognizing the risk posed by MEV, at the bottom of his BitcoinTalk post announcing the challenge, Todd included the following note:

We advise mining the block in which you collect your bounty yourself …. If the bounty value is sufficiently large other miners may find it profitable to reorganize the chain to kill your block and collect the reward themselves.
— Peter Todd's Bitcointalk forum post

As shown here, the possibility for MEV on Bitcoin has existed from its onset. There is no mechanism preventing MEV from occurring other than the natural measure that Bitcoin’s present use-cases do not create many opportunities for MEV.

Both arbitrage and liquidation can be viewed as beneficial to the market, with arbitrage leading to more efficient pricing and fast liquidations being necessary to ensure lenders recoup their money. That being said, MEV as a whole is often a zero-sum game where any profit for the miner comes at the expense of a user on the network. In the case of frontrunning, the market is left less efficient since a participant is forced to overpay for an unchanged asset and no new information is provided to the market in doing so.

Also, MEV incentivizes miners to further deviate from the time order of transactions in favor of ordering by transactions that are more profitable to them. This proves hypocritical for networks that are often portrayed as fairer alternatives to existing systems. Fears over miners acting as middlemen would only be exacerbated as MEV grows, and could hurt adoption or lead to additional regulatory scrutiny.

A persistent question in the minds of both supporters and critics alike is what will happen once the last bitcoin is mined? The concern lies in what is viewed as a lack of incentive to mine bitcoin once the block subsidy is no longer available, with transaction fees acting as the only revenue stream for miners.

Here, MEV may provide a possible solution as its presence opens the door for new potential sources of mining revenue. If collected fees do not suffice in a low-subsidy environment, a form of MEV could serve as a new incentive for miners to continue processing blocks and securing the network.

While the technical possibility exists for MEV to occur on Bitcoin, what does not yet exist are the economic incentives for miners to search out MEV. However, any future where smart contracts are built upon Bitcoin would represent a boon for MEV as it is those complex transactions which enable MEV. Or, perhaps, MEV could also become more prominent in a future where miners are forced to find alternate streams of revenue in the face of dwindling block rewards.

Regardless, MEV is not currently widespread on Bitcoin and it is unlikely to become so unless circumstances change. In fact, this reality may avail Bitcoin as it could be argued MEV’s benefit to miners is greatly outweighed by its potential harm to the network. If MEV is to be a benevolent feature moving forward, it must advance miner profitability without compromising network fairness or decentralization.

Bitcoin mining is a competitive industry with thin profit margins. Bitcoin mining should only be undertaken with cheap power rates and prior understanding of the upfront and variable costs of operation.

Related Terms
Proof-of-Work (PoW)
Bitcoin miners must submit Proof-of-Work in the form of a valid hash in order to have their block be considered valid.
Learn more
Block
A block is a collection of transactions that occur on the Bitcoin network. Blocks are linked together chronologically to form a blockchain.
Learn more
Arbitrage
Arbitrage is the process of taking both sides of a trade simultaneously in order to realize an immediate and riskless profit. This is done by selling an asset in one market where the price is higher and buying it in another market where the price is lower.
Learn more
Explore More Terminology ›
River Intelligence