Who Owns the Most Bitcoin?

Satoshi Nakamoto is the anonymous creator of Bitcoin, but he doesn’t own the Bitcoin project, nobody does.

Bitcoin is software ran by a decentralized network, which means no single party is in control of the set of rules in the software. These rules must be agreed upon by the network participants in order for them to transact.

Who Owns The Most Bitcoin?

Satoshi Nakamoto not only invented, but also kickstarted Bitcoin, by being the first miner to create blocks of transactions. It is estimated that Satoshi mined more than 22,000 blocks starting from January 3rd 2009, and received more than one million bitcoin in cumulative block rewards for his work. As a result, Satoshi is estimated to hold the largest bitcoin cache, more than 1 million BTC, valued at approximately $23 billion today. This bitcoin is not stored in one address, but spread across those roughly 22,000 addresses. None of it was ever spent besides a few test transactions. Satoshi left the project in 2010 and hasn’t been heard from since. 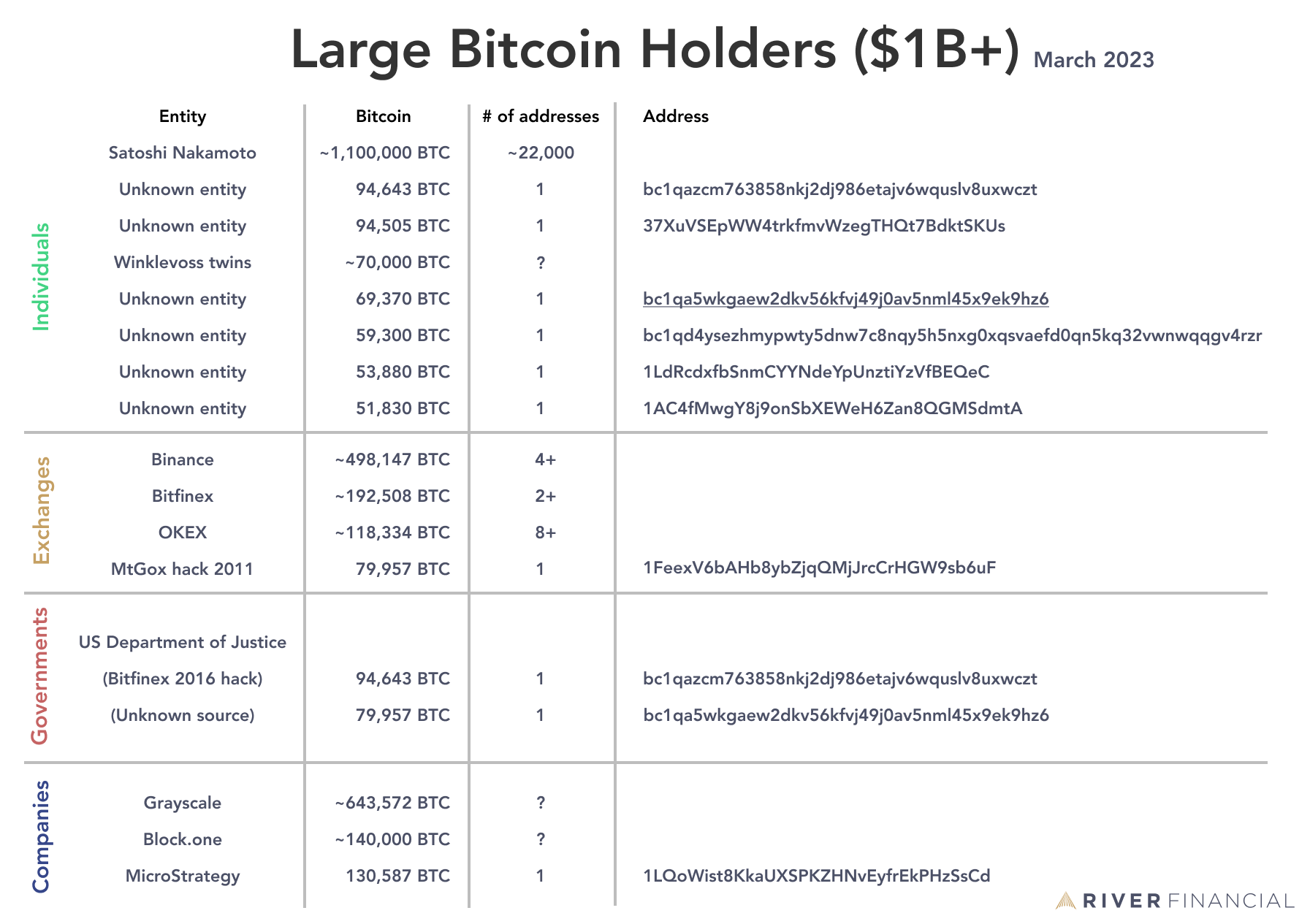 Over time, bitcoin ownership has become distributed in strata based on total bitcoin wealth. These categories are based on the total number of bitcoin located at an address. 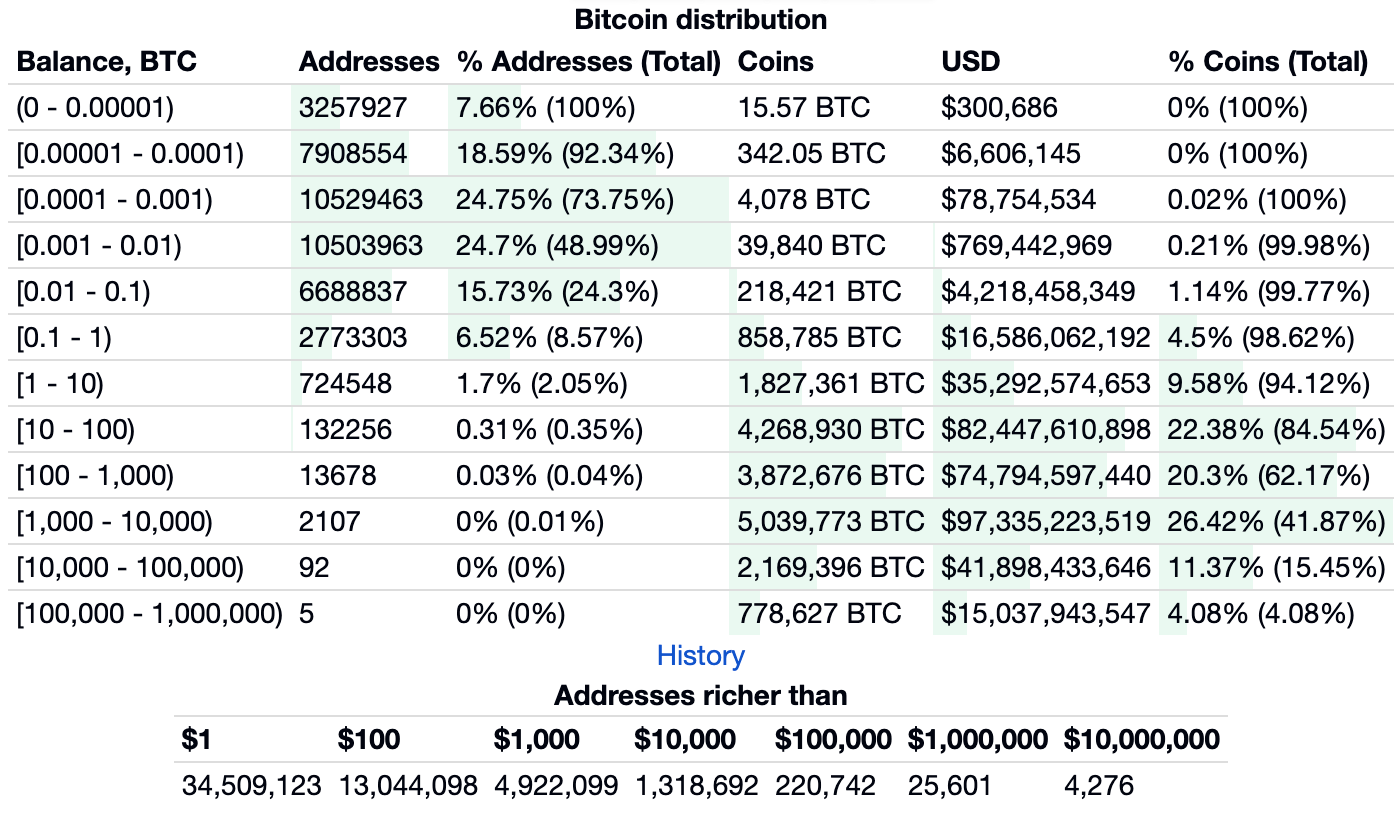 Not including Satoshi, five bitcoin addresses contain more than 100,000 bitcoin each. The five addresses with the most bitcoin belong to Binance, Bitfinex, MicroStrategy, and another address, whose identity is unknown. These five addresses collectively own more than 778,000 bitcoin. The exchange addresses represent the holdings of many individual investors who are not holding their own keys.

Companies Holding the Most Bitcoin

Companies can use corporate savings, called a treasury, to buy bitcoin. The benefit of this strategy, employed by companies such as Microstrategy, Tesla, and Galaxy Digital Holdings, is to protect their savings against inflation and negative-yield bonds.

Large corporations who can issue corporate bonds with low interest rates also have the opportunity to create cheap debt and use the funds to purchase bitcoin. In theory, as the dollar’s value decreases with inflation and bitcoin continues to store value, paying off fiat debt will require fewer bitcoin. This strategy is similar to buying on margin or using leverage.

Collectively, public companies own more than 216,038 BTC, equal to 1.029% of the total supply. The ten public companies holding the most bitcoin on their balance sheet hold nearly 200,000 BTC total.

➤ Learn more about investing bitcoin in an LLC.

Indirect bitcoin exposure is one investment method for investors seeking to gain exposure to the bitcoin price without directly purchasing bitcoin. Some investors also believe they can reduce risk by investing in an extensive portfolio with many bitcoin-related assets. A Bitcoin exchange-traded fund (ETF) may contain equities and other bitcoin-related assets that result in a more diversified portfolio. Bitcoin ETFs track the price of bitcoin, albeit imperfectly. Some proposed ETFs are based on bitcoin futures and other derivative products.

Retirement accounts are another popular method for indirect exposure to bitcoin. A growing number of custodians offer financial services and Traditional or Roth IRA products that can include bitcoin.

➤ Learn more about investing bitcoin in a retirement account.

Governments Holding the Most Bitcoin

Governments across the world own an estimated 259,870 BTC, representing 1.237% of the total supply. Reports claim that Bulgaria holds more than 213,519 BTC, and members of the Ukrainian government privately hold roughly 46,351 BTC. The United States government sold bitcoin recovered from the Silk Road in 2015 that would have been worth several billion dollars today, and they currently hold another cache of almost 70,000 BTC, which they are expected to sell in the near future. The U.S. Marshals Service auctions bitcoin seized by the FBI and other government agencies on its website.

➤ Learn more about how much bitcoin governments own.

There can never be more than 21 million bitcoin. For that reason, percent ownership of the total bitcoin supply can be safely calculated using the hard cap of 21 million.

However, some models use the total supply of bitcoin excluding the more than 1,000,000 BTC that Satoshi Nakamoto received in block rewards and the estimated 3-4 million coins that are lost forever. This places the total supply of bitcoin closer to 18 million rather than 21 million. Regardless of the model used, there is a strict upper limit on the number of bitcoin that will ever exist. Therefore, all bitcoin owners can be confident that their share of bitcoin will never be diluted below a certain percentage.

How Do I Get Bitcoin?

There are a number of ways to accumulate bitcoin. Most often, bitcoin is purchased with fiat currency. Bitcoin can also be earned, inherited, or gifted.

How Is the Bitcoin Price Determined?

The Bitcoin price is determined through supply and demand. Because the market cap of bitcoin is small relative to the market capitalization of other currencies, small changes in demand or supply can produce price volatility greater than that of fiat currencies with theoretically unlimited supply.

What Is Bitcoin Cold Storage?

Related Terms
Unspent Transaction Output (UTXO)
A UTXO is a discrete piece of bitcoin. Bitcoin does not use accounts and balances. Instead, individual pieces of bitcoin are owned by individuals, analogous to physical coins or cash.
Learn more
Address
An address is used to receive bitcoin and is represented as a string of letters and numbers. When you send bitcoin to an address, only the owner of the private key(s) corresponding with the address can spend that bitcoin.
Learn more
Balance Sheet
A balance sheet is a document that details the assets, liabilities, and shareholders’ equity of an organization. Balance sheets are commonly referenced to assess the financial health of a company.
Learn more
Explore More Terminology ›
River Intelligence