What Is a Bitcoin Improvement Proposal (BIP)?

What Is a Bitcoin Improvement Proposal?

A Bitcoin Improvement Proposal (BIP) is a formal proposal to change Bitcoin. As a piece of software, Bitcoin is always undergoing upgrades—bugs need to be fixed, algorithms can be made more efficient, code can be simplified, compatibility with other software must be maintained, and new features can be added.

In the case of normal software belonging to centralized projects, a manager or lead developer might simply assign tasks and dictate the changes that need to be implemented. However, Bitcoin is an open source, consensus-based system. There is no leader. The BIP process organizes the Bitcoin community in the absence of a central leader.

As a new monetary system, Bitcoin’s reputation is still being established, and the security of the network is paramount to maintaining trust. Thus, Bitcoin’s development process is intentionally slow and deliberate. The process from an initial proposal, to a formalized BIP, to an activated change, is lengthy.

How Are Bitcoin Improvement Proposals Created?

Bitcoin is a truly open system. Anyone can propose a BIP, regardless of credentials or reputation. Typically, BIPs begin as informal proposals on the Bitcoin email list or some other communication channel, such as IRC or Slack. A developer can email their idea to the email list, and anyone who is interested will respond with feedback. Some ideas remain at this discussion stage for many years, either because the community cannot find consensus, because the idea requires fine tuning, or because Bitcoin is not yet ready for the proposed changes.

Once a proposal has been fine-tuned, it is assigned a BIP number and published to the Bitcoin Core GitHub repository of BIPs. At this point, the BIP is official, but it is not yet approved or implemented.

How Are Bitcoin Improvement Proposals Approved?

When a BIP is published, it is discussed by both the developer community and the broader community of Bitcoin users. In the background, if the BIP necessitates code changes to Bitcoin Core, developers will work on writing, testing, and integrating that code.

If legitimate arguments are raised by a significant portion of users, the BIP will likely be withdrawn or rejected, and the proposal process must be abandoned or restarted.

If the community achieves rough consensus, and no legitimate drawbacks of the proposal are found, the community will choose an activation path and begin activating the BIP. This process takes different forms depending on the type of BIP at hand. 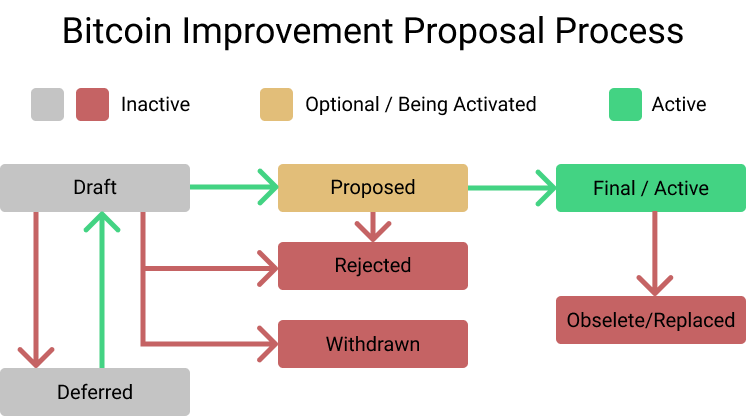 Bitcoin is a network governed by rules. These rules are independently enforced by tens of thousands of Bitcoin nodes, who must all establish consensus by following the same rules. If half of Bitcoin nodes follow one rule set and the other half follow a different rule set, the network would fracture.

Consensus BIPs are carefully constructed to remain backwards compatible to the greatest extent possible. This allows old nodes that choose not to upgrade to remain full members of the network.

The SegWit upgrade was a major consensus upgrade, and the changes to Bitcoin’s rule set were proposed in BIP 141. Included in BIP 141 was a description of the witness field, a new part of Bitcoin transactions, and two new script types, P2WPKH and P2WSH. These changes required acceptance by nodes on the network, making BIP 141 a consensus BIP.

Some BIPs do not propose code changes to Bitcoin Core directly, but rather establish standards to be used by other Bitcoin software, such as wallets and exchanges. These BIPs might propose encoding schemes or best practices for securing bitcoin. Since Bitcoin is an open system, every software provider can choose whether or not they will adopt these standards.

Some standards require universal adoption in order to guarantee interoperability. For example, a wallet which cannot interpret a Bitcoin address will be completely useless, and a wallet which uses different address formats from the rest of the Bitcoin community will lose money for its users.

Other standards, such as BIP 39 and BIP 174, are more optional. In fact, mnemonic backup phrases as defined in BIP 39 have been adopted by many wallet providers, but are not used by Bitcoin Core itself. Likewise, not all wallets have adopted the PSBT standard defined in BIP 174. Although this lack of universal adoption is inconvenient, it does not eliminate the utility or security of the software.

Standards BIPs often accompany consensus changes. In the case of SegWit, BIP 142 established a standard format for SegWit addresses, but it did not directly change the rules of the Bitcoin network. Thus, although BIP 142 was part of the SegWit upgrade, it is a standards BIP rather than a consensus BIP.

Finally, some BIPs are created to streamline Bitcoin development or community discussion. These BIPs usually do not require any code changes to Bitcoin Core or other Bitcoin software. For example, BIP 1 and BIP 2 specify the lifecycle and format of future BIPs, and how their activation should be handled.

Two of the most important process BIPs are BIP 8 and BIP 9. These proposals outline two potential processes for activating soft fork upgrades to the Bitcoin consensus. They are not consensus BIPs, because they do not propose changes to the Bitcoin consensus. Rather, they set out rules for how consensus changes should be introduced to Bitcoin, in order to avoid conflict and a potential fracture in the network.

The Bitcoin Improvement Proposal mechanism organizes Bitcoin’s development process and maximizes transparency and community decision-making, keeping Bitcoin as open and decentralized as possible. While a smaller group of Core developers write most of Bitcoin’s code and propose BIPs, the activation of these proposals is entirely decided by the nodes of the network, and any individual can run a node.

What Is Segregated Witness (SegWit)?

Segregated Witness, or SegWit, is an upgrade to Bitcoin that was activated in 2017 to fix transaction malleability and help Bitcoin scale. SegWit introduced two new address types and enabled the launch of the Lightning Network.

What Is Taproot and How Will It Benefit Bitcoin?

Taproot is a proposed upgrade to Bitcoin which will introduce Schnorr signatures, Pay-to-Taproot (P2TR) outputs, and new scripting capabilities. P2TR outputs offer great privacy improvements and enable Merkelized Alternative Script Types, a way for bitcoin to be locked to multiple scripts at once.

What Is Bitcoin Core?

Bitcoin Core is the most popular version of the Bitcoin software. It powers almost all of the nodes on the Bitcoin network, allowing them to enforce the same ruleset and achieve consensus.

Related Terms
Consensus
Consensus is the ideal and the method of coordination between individuals in a decentralized system. Consensus is achieved at the development level with regards to changes to the Bitcoin protocol, and it is also achieved with regards to agreement on the state of the blockchain.
Learn more
BIP 32 (Hierarchical Deterministic Wallets)
BIP 32 is the Bitcoin Improvement Proposal which introduced the standard of Hierarchical Deterministic (HD) wallets and extended keys to Bitcoin.
Learn more
Bitcoin Core
Bitcoin Core is the reference implementation for the Bitcoin source code, meaning all other implementations look to Core for guidance. Bitcoin Core was started by Satoshi Nakamoto when they released the first version of Bitcoin's source code.
Learn more
BIP 340 (Schnorr Signatures)
Bitcoin Improvement Proposal (BIP) 340 introduces Schnorr signatures to Bitcoin Core. Schnorr signatures offer several significant advantages over ECDSA. BIP 340 is part of the Taproot upgrade.
Learn more
Open Source
Open-source describes a project whose source code is publicly available and licensed such that individuals can use and alter the source code freely.
Learn more
Explore More Terminology ›
River Intelligence