Bitcoin’s scripting language is simply called Script. All Bitcoin scripts are written in Script. It is a simple language that is not Turing complete, meaning it lacks several logical functions, including loops. This is done to ensure that no Bitcoin script can consume inordinate computing power and harm nodes on the network.

Script is used almost exclusively to lock and unlock bitcoin, not to build applications or run programs. Script’s simplicity also gives Bitcoin security and makes it easier for developers to avoid losing money while designing wallets or applications on top of Bitcoin.

All Bitcoin transactions use Script to define how outputs can be spent. In other words, the script of a Bitcoin transaction determines to whom the bitcoin was sent. Bitcoin has a few different scripts, with Pay-to-Public-Key-Hash (P2PKH) being the most popular. P2PKH is a simple script which pays bitcoin to an address.

Although SegWit script types—P2WPKH and P2WSH—offer savings on transaction fees, adoption of these new script types has been slow. As of April 2021, almost four years after SegWit’s activation, P2PKH scripts are used by over 70% of UTXOs. 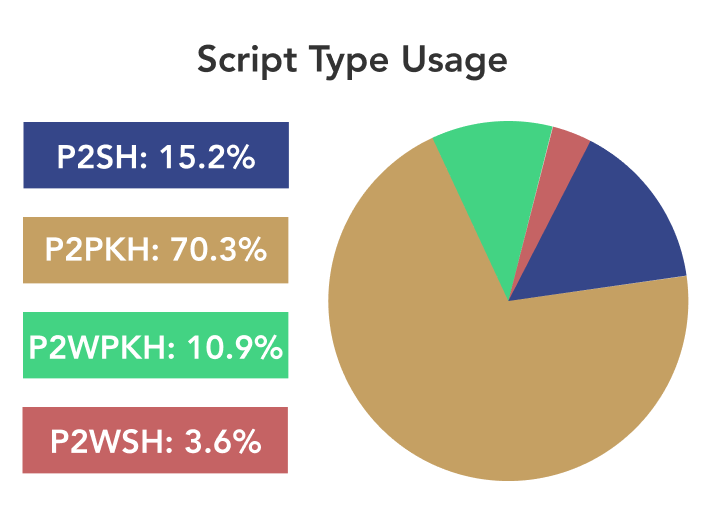 Related Terms
Multisig
Bitcoin can be sent to an address such that spending that bitcoin requires multiple signatures from different private keys. This setup allows joint custody of funds, and can be as simple or as complex as needed.
Learn more
Pay-to-Public-Key-Hash (P2PKH)
Pay-to-Public-Key-Hash (P2PKH) is a type of transaction which spends bitcoin to the hash of a public key. A public key hash is also known as an address, and P2PKH is the most common transaction type.
Learn more
SegWit
Segregated Witness (SegWit) is a soft-fork upgrade to Bitcoin which was activated in 2017. SegWit fixed the problem of transaction malleability, and paved the way for the implementation of the Lightning Network and many other upgrades.
Learn more
Tapscript
Tapscript is the scripting language used to enable a variety of new transaction types as part of the Taproot upgrade. Tapscript takes advantage of Schnorr signature aggregation.
Learn more
Explore More Terminology ›
River Intelligence