Pay-to-Taproot (P2TR) is a type of ScriptPubKey which locks bitcoin to a script that can be unlocked by a public key or a Merkelized Alternative Script Tree (MAST), allowing the bitcoin to be spent in a variety of ways.

On the surface, a P2TR output locks bitcoin to a single Schnorr public key, which we call Q. However, this public key Q is actually the aggregate of a public key P and a public key M, which is calculated from the Merkle root of a list of other ScriptPubKeys. 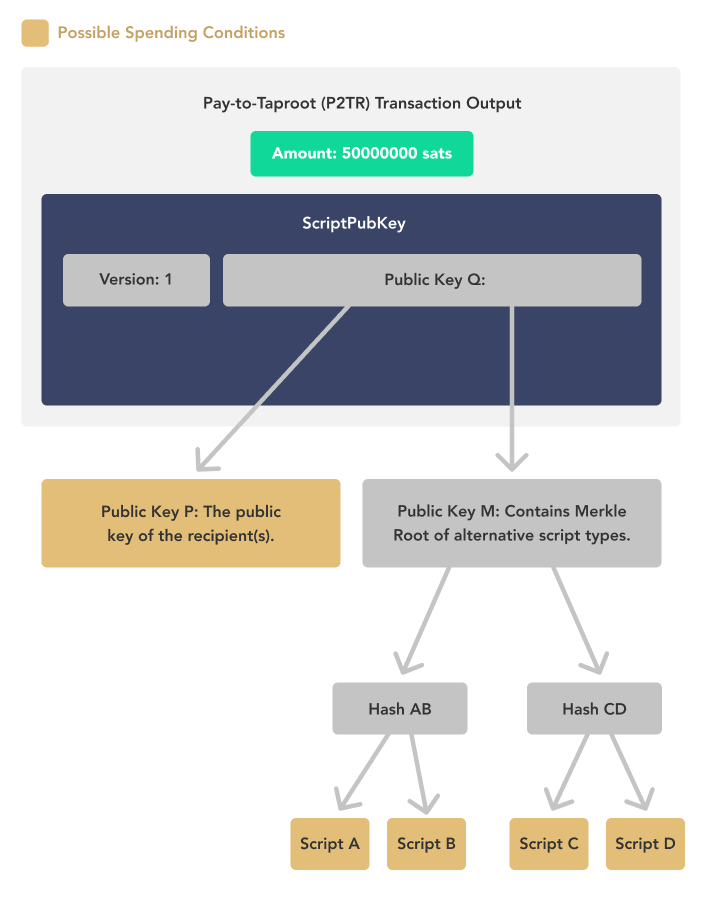 Pay-to-Taproot combines the functionality of Pay-to-Script-Hash (P2SH) and Pay-to-Public-Key (P2PK) scripts flexibly, allowing the owner or owners to choose how they would like to spend their money. This makes P2TR a significant improvement for the privacy of users.

While there are many ways of spending a P2TR output, only the one that is used must be revealed, allowing the unused alternatives to remain private. In addition, thanks to Schnorr key aggregation, the public key P can itself be an aggregate key, possibly representing a multisig setup. Most importantly, the status of public key P as a multisig key or a single key is never revealed, and thus all P2TR outputs resemble one another, undermining many chain analysis heuristics and preserving privacy for users.

Pay-to-Taproot is a version 1 SegWit output, meaning that signatures for P2TR inputs are stored in the Witness of a transaction, not in the ScriptSig. Like other SegWit addresses, P2TR addresses will use Bech32 encoding.

Related Terms
Taproot
The Taproot upgrade is described in BIPs 340, 341, and 342, and introduces the Schnorr signature scheme, Taproot, and Tapscript.
Learn more
Schnorr Signature
Schnorr is a type of digital signature scheme similar to the ECDSA scheme. The Schnorr scheme presents several security, privacy, and efficiency advantages over ECDSA.
Learn more
Merkelized Alternative Script Tree (MAST)
A Merkelized Alternative Script Tree (MAST) is a proposal to encapsulate an arbitrary number of different scripts in a Bitcoin address.
Learn more
ScriptPubKey
The ScriptPubKey is a script which controls how bitcoin can be spent. Bitcoin is locked by the ScriptPubKey and unlocked when the owner submits a valid ScriptSig.
Learn more
SegWit
Segregated Witness (SegWit) is a soft-fork upgrade to Bitcoin which was activated in 2017. SegWit fixed the problem of transaction malleability, and paved the way for the implementation of the Lightning Network and many other upgrades.
Learn more
Witness
The witness of a transaction is a section of SegWit transactions not included when a transaction is hashed and signed. The witness contains the witnessScripts for all SegWit inputs of a transaction.
Learn more
Bech32
Bech32 is an encoding scheme used to encode SegWit addresses and lightning invoices. The Bech32 alphabet contains 32 characters.
Learn more
Explore More Terminology ›
River Intelligence